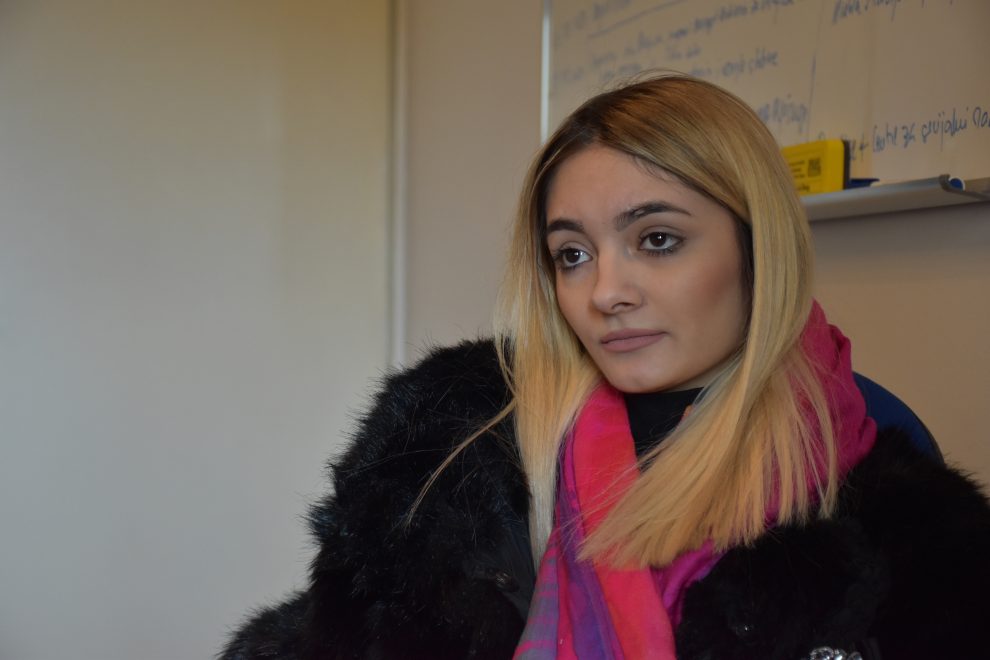 As a girl, she participated in gatherings of groups fighting to improve the status of Roma and Egyptian (RE) women and girls, with a single mother who had nowhere to leave her. Activism is her main preoccupation today – she studies social policy, works on social inclusion, and she does not exclude political engagement in the future.

Every day, she tries to impose her own example through concrete actions to many Roma girls and their parents and to be seen as a model for a better and more integrated future for Roma and Egyptian women and girls.

Interview with Šejla Pepić iz part of project Civil society in action promoting and protecting Roma and Egyptian rights in Montenegro, within we promote women’s role models. The project is funded by EU and implement Help with the Roma youth organization Walk with us Phiren Amenca.

Help : You’re a 20-year-old member of the Roma–Egyptian ( RE ) community in Montenegro, you are a student and at the same time you are an activist. Since this is still not a regular occurrence among Roma and Egyptians in Montenegro, can you tell us what was crucial for your life path and the choices you’ve made?

Pepić: It was probably due to the positive example I had at home- my mother (Behija Ramović). It was not a typical case characteristic for the Roma and Egyptians who were either victims of discrimination or their own traditions, like early marriages. I had a positive example at home. My mother became a single parent when I was only seven months old and she raised and educated me.

So I always told myself – if she could do it, why wouldn’t I? She is also my role model because she has been involved in the non-governmental sector (NGO) for 15 years and is now one of the few Roma women employed in state institutions.

So I carry a positive example from home. Even when I was a child, because she had no place to leave me, she attended educational seminars with me, which I continued to do as an adult.

Help: And how does your whole engagement look like today?

Pepić: I am currently in the third year of political science studies – social work. I work as an associate in social inclusion in the elementary school “Božidar Vuković Podgoričanin”. This is a school that has the largest number of RE children, and I am also involved in additional activities of NGOs such as the Center for Roma Initiatives, Walk with us – Phiren Amenca, and I am also a member of Women’s Network – Prva.

Help: What is the focus of your work in all these engagements?

Pepić: I always strive to set as good an example as possible to co-operate with young people, especially to women and girls: communicating with them, motivating them to fight for their rights as well. I put a greater focus on the girls, because they are less familiar with their rights than the rest, and they don’t know much about the work in community neither.

Help: When you say ‘community work’, I presume you mean the work with families?

Pepić: Both with children and with families, I mean the whole RE community.

Help: How would you evaluate the position of your community in Montenegrin society now?

Pepić: I would like to put a positive emphasis primarily on the Roma and Egyptian, because we see an improvement here, they know their rights a lot better nowadays, but there is a lot of room for improvement of course.

Help: In what sense?

Preventing early marriages — problem number 1 of the female RE population

Pepić: Because they continue to face discrimination, both in the community and in institutions. There is a lot of room for improvement within this framework, institutions – NGOs – the community.

Help: When you say community, do you mean the whole RE community or just the families?

Pepić: I think of the RE community as a whole, because Roma women and Egyptian women themselves face discrimination within the community.

Help: When it comes to education of girls, since you work in school, can you make a comparison of how it used to be, whether more girls are going to school now, whether these girls continue their education after primary school, and what are the key factors in the process, both positive and negative?

Pepić: There is a recent increase in the number of the female population which continues education after primary schools, and an increase in the number of girls who generally go to school. All of this thanks to the fact that the whole process involved associates for social inclusion. They were actually introduced to the system in order to help to increase this figure, but still it is not on the satisfactory level, because the goal is to make all the children go to school.

For example, we continue to face a major problem with arranged marriages. When a girl of 13 years is committed to an arranged marriage, one of the consequences is the disruption of education, in addition to her threatened medicinal condition, her further future, and her childhood disrupted – literally all of this just by entering an arranged marriage.

Help: Speaking about arranged marriages, in your contacts with the family and with the community, tell me in how many cases do you succeed to sway or divert them? What is the biggest problem for you in these situations, are the families aggressive towards you, and how often do you break through that wall? What was your experience?

Pepić: Well, I can say that I focus in two different ways in those cases – as a mediator or as an NGO activist. As a mediator for instance, when we find out that the girl has not been going to school for a few days we go immediately to court, we check the reasons behind her absence, and when you find out that it was an arranged marriage we report to the school principal – and she takes care of such cases. This is how it looks like if I act as a mediator.

If I act as an NGO activist, it is a completely different procedure. In such cases, we are the local coordinators who publish the Center for Roma Initiatives, which mainly deals with these cases, and after that it may involve police and centers for social work.

In these situations, there are both positive and negative examples.

Pepić: There are more negative examples. Because there are 64 cases and charges being filed, and only in one case do we have criminal proceedings pending. The most common problem is that the institutions do not run the case because they do not have enough legally valid evidence. And then it remains for the organization itself to prevent the girl from being taken away, very often as far as outside of the state.

She does not rule out getting into politics one day

Help: What does it mean when you say that your case was an exception thanks to the self-initiative, thanks to your mother, and not the system?

Pepić: That is why we try to show as many positive examples to the community so other girls and women would have some motivation to join, for example, an NGO, which would also be an attempt to contribute to integration.

It is also important, and I have to mention that in the Montenegrin politics there are no representatives of RE community. And so, a joint RE movement has been set up that focuses solely on this, making it more visible and problem solving – easier.

Help: You are a student of the Faculty of Political Science, does this mean that you are potentially interested in participating in politics one day?

Pepić: Maybe, my path is social work and social policy and that’s it. I’m interested in the one and the other, so I would not rule out this possibility.

Help: In recent years, there have been numerous programs and projects dealing with the advancement of women’s rights of the RE population. Do these projects deliver the expected results, or is there anything else you can do to make those results better?

Pepić: There are results and it is visible, statistics and field work show that, but not to the extent we would like. I think more work needs to be done to improve access to institutions. The state will always give support to women’s rights organizations at the outset, as there are not many of these organizations, so it remains always possible.

Help: As a member of the RE population that has been able to secure full integration into society, tell me, have you been and to what extent have you encountered discrimination and how have you dealt with it?

Pepić: I can freely say that I was lucky that I did not face discrimination, but I am also sure that if I were in such situations that I would be able to cope with it, thanks to the numerous seminars and trainings I went through. But I can say from working with the community that they most often face discrimination in education and institutions.

When I say in education, I do not mean discrimination of RE children by teachers, but by children of the population majority. All of this I would say comes from home, as children are taught at home that way they treat the RE population: they do not want to socialize with them, or have a bad opinion about RE girls… because they will get married early or will leave school early.

Help: Do you have programs in which the girls of that age learn and are empowered to deal with that?

Pepić: We have. Within the NGO program, we have workshops where we work with them with the support of the community and the school. And it really does have effects. I can say that in Podgorica Primary School “Božidar Vukovic Podgoricanin”, attended by most RE children, there is no discrimination at all. Not only because they are practically the majority population, but precisely because of their work on it.

Also, now an increasing number of girls are going to high school and finishing it, and as a result of this the distance is narrowing and the situation is improving.

Also, I know of more cases like my own – when RE girls enroll in studies others are looking at them suspiciously because of their first and last name, when they realize that they are Roma or Egyptian. However, when they show an equal interest in learning, their colleagues admit to them that they were prejudiced and thought that they, like the rest of the RE community, were not interested in education. Direct communication breaks down prejudices – just by positive examples.

Pepić: I see myself as accomplished both professionally and privately, with a focus on further fighting for the rights of the RE population, especially women. I also think that the status of the RE community in Montenegro will be significantly improved during this period so that my struggle will be much easier.

I definitely see my future in the direction of activism.