HELP opened its office in Podgorica, the capital of Montenegro, in April 1999. The office was opened during the peak of the Kosovo War, which lasted from 1998 to 1999. The ending of the war led to a tumultuous year for humanitarian organisations working in Montenegro. Beneficiary profiles and numbers changed dramatically, from a peak influx of over 84,000 Kos Albanian internally displaced people (IDPs) in May, followed by a sudden and massive return to their hometowns in July, to then be followed by a second influx of Serbian, Montenegrin, and Roma IDPs as a result of continued unrest in Kosovo.

The internal socio-economic and political context of the Republic was equally turbulent. With substantial amounts of aid flowing into the Republic, the focus of the humanitarian community widened to include the needs of Montenegro’s social cases: social welfare recipients, institutionalized individuals, and others who are unable to provide for themselves. From the start of its operations in Montenegro until May 2001, HELP provided a wide range of humanitarian assistance including food, hygienic items, and the like.

Later on HELP adjusted its programmes to the developments and needs of the country. Subsequent programmes aimed at supporting displaced persons from Kosovo, refugees from the wars in Croatia, Bosnia and Herzegovina, as well as the socially disadvantaged groups in Montenegro. The changing needs also required a change in HELP’s programmes; humanitarian emergency aid was replaced by programmes aiming at rehabilitation and self-reliance (for more details please see our project list). 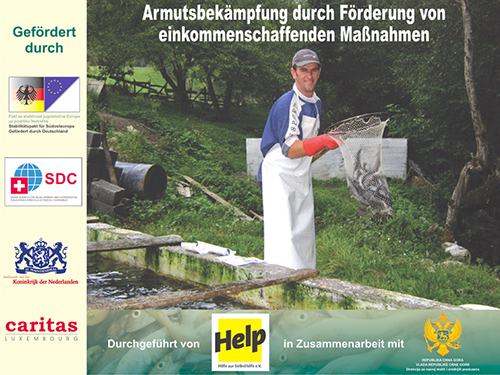 Rehabilitation projects were geared towards improving the housing situation of displaced persons and refugees and also included some of Montenegro’s social cases, both in private accomodation and collective centers. On the other hand, rehabilitation focused on the repair of public buildings such as kindergartens, schools, and libraries. The latter programmes had become possible through funding provided by the German government for the Stability Pact for Southeastern Europe: public buildings were repaired in the cities of Ulcinj and Kotor. The basis of this support was the project partnership with the German towns of Kehl am Rhein and Wülfrath as the Stability Pact had stipulated closer contacts between the people of Europe and those in Sebia and Montenegro. HELP could greatly facilitate the contacts between Kotor and Kehl am Rhein as well as between Ulcinj and Wülfrath.

The start of HELP‘s self-reliance programme in summer 2001 is an important landmark away from traditional humanitarian assistance towards longer- term economic rehabilitation / development assistance. A feasibility study commissioned by HELP in spring 2001 had already shown that new job opportunities and own income generation were the main route for improving the socio-economic status of IDP, refugee, and social case households in Montenegro. In the second half of 2001 HELP provided more than 250 IDPs, refugees, and social cases with material inputs that allowed them to start their own small business activities – thus providing them with an alternative to further dependence on humanitarian assistance. The programme was a huge success and HELP strives to continue this programme to date.

For our projects and programmes we count on public donations. We also rely on governmental, European, and third parties’ funding. HELP will continue to play a very active role in all aspects that are suitable to improve the life of Montenegrin citizens, IDPs, and refugees alike. HELP gratefully acknowledges it is able to provide assistance to Montenegro thanks to the support of its international donors, including the German Foreign Office, the German Ministry for Economic Cooperation and Development the European Community Humanitarian (ECHO) and European Commission offices, among others.

HELP is a German non-governmental relief organisation duly registered with the courts of law in Bonn. In the wake of the war in Afghanistan and the hereby caused refugee crises, Members of Parliament of all parties represented in the German parliament and other distinguished personalities founded HELP in July 1981. HELP then started to continuously expand its humanitarian work to other countries. Aid is given regardless of the race, creed, or nationality of the recipients, and without adverse distinction of any kind. Aid priorities are calculated on the basis of need alone. The organisation operates around the world, providing help for self-help in countries such as Montenegro, Pakistan, Haiti, Zimbabwe, the Philippines, Iraq and many more.